Hardoi district is a district of Lucknow Division of Uttar Pradesh. It lies between 26'-53" to 27"-31'North Latitude and 79'-41" to 80'-46" East Longitude. Its north border touches Shahjahanpur & Lakhimpur Kheri Districts. Lucknow and Unnao are Situated at south border, West Borders touches Kanpur & Farrukhabad and on eastern border Gomti river separates the district from Sitapur.

According to general conventions hardoi district is related with "HIRNAKASHYAP" its present name hardoi is a distorted version of its earlier name "HARIDROHI ". In view of some people this district was colonized by Hardevbaksh and just because of this reason there is an old locality Hardevganj exists in the city. Mallawa, Bilgram, Pihani, Shahabad, Sandila & Ruiyaa are the places of historical significance. According to some historians Mallawa was colonized by Buddhists while some believed that Sayyed Salar Masood Gazi came here. Earlier this area Mallawa was district headquarter. The ancient name of Bilgram is "SRINAGAR" its present name Bilgram was given by some associates of .Mahmood Gajnavi.Pihani is derived by persian word Pinhani (place of shelter), it is believed that king of Moughal dynasty Humayun took shelter in the forest of Pihani when he was defeated by Shershah Suri. Pihani is also related with the minister Sadarejahan of Emperor Akbar. His tomb and paintings are still here.According to the view of some people, Sandila was colonized by Rishi Sandilya. Sandila is also famous for old buildings,mosque & barakhamba. 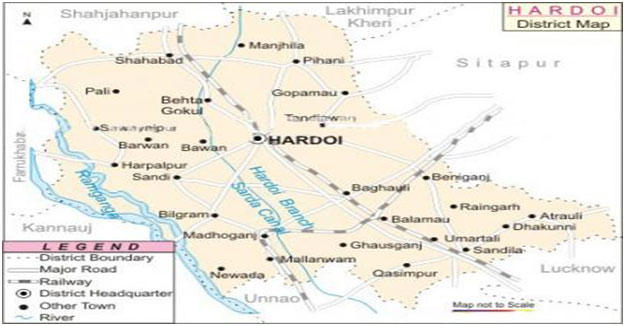 
Area, Production and Productivity of major crops cultivated in the district


Production and Productivity of livestock, Poultry, Fisheries etc. in the district